On 26th July 2019, Sports Direct management delivered a chaotic announcement of their annual results including multiple delays and the shock revelation of a £614 million tax bill.

The annual results showed evidence of a poor performance at Sports Direct’s core chain, a string of ill-advised acquisitions, the exit of several senior executives, and a £5.35 million pay award to Mike Ashley’s future son-in-law which stoked investor concerns of government issues at the company.

Shares in the retail group dived more than 25% at one point on the day of the results eventually recovering those loses to end the trading day down only 6.5%. 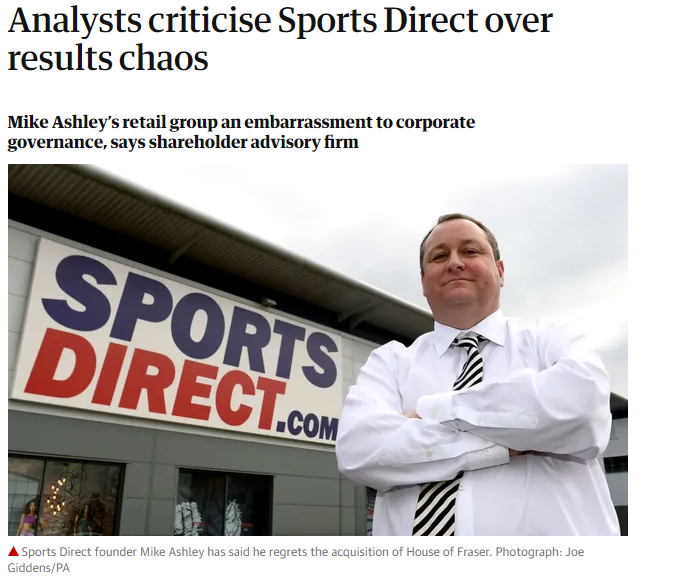 The results highlighted weakness across their Sports Direct store banner in the UK where same store sales fell 1.6% for the year with recently acquired House of Fraser stores seeing a £54.6 million operating loss for the period. In addition, the company admitted it’s relationships with key third party brands was “currently challenging”, despite efforts to invest in the appearance of their store network.

Woozle’s team of primary research uncovered evidence of continued accelerating LFL sales declines across Sports Direct’s physical store network in the UK and weaker average transaction values across premium third-party brands. In addition, our research suggested margin contraction at the group as well as operational and logistical problems relating to the integration of House of Fraser stores that continued to report widening losses.

Clients were able to initiate or scale their short positions with plenty of time to capitalise on the more than 25% drop in Sports Direct’s share price in the weeks leading up to the results.

Woozle Named “One to Watch” in List of Best European Businesses